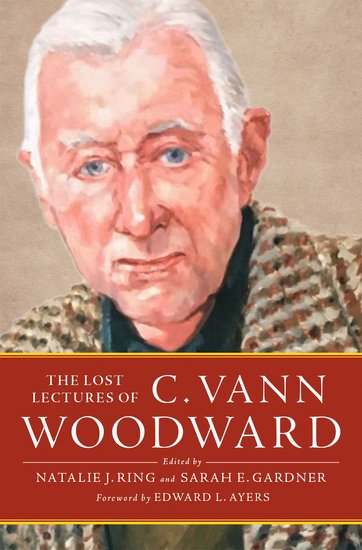 The Lost Lectures of C. Vann Woodward focuses on lectures Woodward delivered in the mid-twentieth century that reflect his life-long interest in exploring the contours and limits of liberalism during key moments of great change in the South.

C. Vann Woodward is one of the most significant historians of the post-Reconstruction South. Over his career of nearly seven decades, he wrote nine books; won the Bancroft and Pulitzer Prizes; penned hundreds of book reviews, opinion pieces, and scholarly essays; and gained national and international recognition as a public intellectual. Even today historians must contend with Woodward's sweeping interpretations about southern history. What is less known about
Woodward is his scholarly interest in the history of white antebellum southern dissenters, the immediate consequences of emancipation, and the history of Reconstruction in the years prior to the Compromise of 1877.

Woodward addressed these topics in three mid-century lecture series that have never before been published. The Lost Lectures of C. Vann Woodward presents for the first time lectures that showcase his life-long interest in exploring the contours and limits of nineteenth-century liberalism during key moments of social upheaval in the South. Historians Natalie J. Ring and Sarah E. Gardner analyze these works, drawing on correspondence, published and unpublished material, and Woodward's
personal notes. They also chronicle his failed attempts to finish a much-awaited comprehensive history of Reconstruction and reflect on the challenges of writing about the failures of post-Civil War American society during the civil rights era, dubbed the Second Reconstruction.

With an insightful foreword by eminent Southern historian Edward L. Ayers, The Lost Lectures of C. Vann Woodward offers new perspectives on this towering authority on nineteenth- and twentieth-century southern history and his attempts to make sense of the past amidst the tumultuous times in which he lived.