Equity, Justice, and Humaneness From Hammurabi and the Pharaohs to Justinian and the Talmud 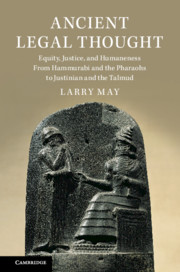 Equity, Justice, and Humaneness From Hammurabi and the Pharaohs to Justinian and the Talmud

"Nearly four thousand years ago, kings in various ancient societies, especially in Mesopotamia (contemporary Iraq), faced a crisis of major proportions. Large portions of the population were horribly in debt, many being forced to sell themselves or theirchildren into slavery to pay off their debts.

This is a study of what constituted legality and the role of law in ancient societies. Investigating and comparing legal codes and legal thinking of the ancient societies of Mesopotamia, Egypt, Greece, India, the Roman Republic, the Roman Empire and of the ancient Rabbis, this volume examines how people used law to create stable societies. Starting with Hammurabi's Code, this volume also analyzes the law of the pharaohs and the codes of the ancient rabbis and of the Roman Emperor Justinian. Focusing on the key concepts of justice equity and humaneness, the status of women and slaves, and the idea of criminality and of war and peace; no other book attempts to examine such diverse legal systems and legal thinking from the ancient world.