Benjamin Franklin and the Ends of Empire 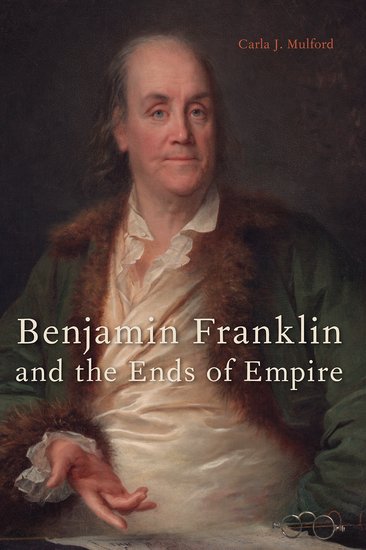 Benjamin Franklin and the Ends of Empire

A study of Franklin's writings on the British Empire and its relationship to the British North America, Mulford assesses the founding father's thoughts on economics, society, politics, and the environment.

Beschrijving Benjamin Franklin and the Ends of Empire

Drawing from Benjamin Franklin's published and unpublished papers, including letters, notes, and marginalia, Benjamin Franklin and the Ends of Empire examines how the early modern liberalism of Franklin's youthful intellectual life helped foster his vision of independence from Britain that became his hallmark achievement. In the early chapters, Carla Mulford explores the impact of Franklin's family history—especially their difficult times during the English
Civil War—on Franklin's intellectual life and his personal and political goals.

The book's middle chapters show how Franklin's fascination with British imperial strategy grew from his own analyses of the financial, environmental, and commercial potential of North America. Franklin's involvement in Pennsylvania's politics led him to devise strategies for monetary stability, intercolonial trade, Indian affairs, and imperial defense that would have assisted the British Empire in its effort to take over the world. When Franklin realized that the goals of British ministers were
to subordinate colonists in a system that assisted the lives of Britons in England but undermined the wellbeing of North Americans, he began to criticize the goals of British imperialism. Mulford argues that Franklin's turn away from the British Empire began in the 1750s—not the 1770s, as most
historians have suggested—and occurred as a result of Franklin's perceptive analyses of what the British Empire was doing not just in the American colonies but in Ireland and India.

In the last chapters, Mulford reveals how Franklin ultimately grew restive, formed alliances with French intellectuals and the court of France, and condemned the actions of the British Empire and imperial politicians. As a whole, Mulford's book provides a fresh reading of a much-admired founding father, suggesting how Franklin's conception of the freedoms espoused in England's ages old Magna Carta could be realized in the political life of the new American nation.