The Civilianization of War 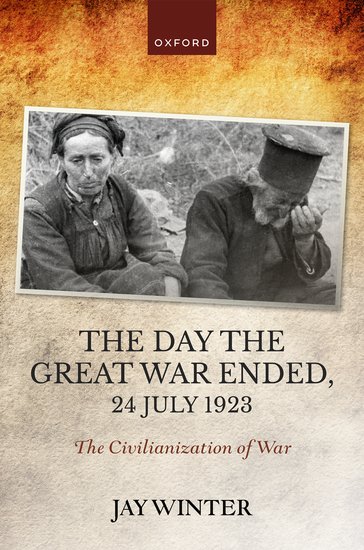 The Civilianization of War

On 24 July 1923 the last Treaty ending hostilities in the Great War was signed at Lausanne in Switzerland. Jay Winter tells the story of the peace conference, and its outcome. He shows how peace came before justice, and how the conference and the Treaty set in motion forces leading to the global war that followed in 1939.

On 24 July 1923 the last Treaty ending hostilities in the Great War was signed at Lausanne in Switzerland. That Treaty closed a decade of violence. Jay Winter tells the story of what happened on that day. On the shores of Lake Geneva, diplomats, statesmen, and soldiers came from Ankara and Athens, from London, Paris, and Rome, and from other capital cities to affirm that war was over. The Treaty they signed fixed the boundaries of present-day Greece and Turkey,
and marked a beginning of a new phase in their history.

That was its major achievement, but it came at a high price. The Treaty contained within it a Compulsory Population Exchange agreement. By that measure, Greek-Orthodox citizens of Turkey, with the exception of those living in Constantinople, lost the right of citizenship and residence in that state. So did Muslim citizens of Greece, except for residents of Western Thrace. This exchange of nearly two million people, introduced to the peace conference by Nobel Prize winner and humanitarian
Fridtjof Nansen, provided a solution to the immense refugee problem arising out of the Greek-Turkish war. At the same time, it introduced into international law a definition of citizenship defined not by language or history or ethnicity, but solely by religion. This set a precedent for ethnic
cleansing followed time and again later in the century and beyond.

The second price of peace was the burial of commitments to the Armenian people that they would have a homeland in the lands from which they had been expelled, tortured and murdered in the genocide of 1915.
This book tells the story of the peace conference, and its outcome. It shows how peace came before justice, and how it set in motion forces leading to the global war that followed in 1939.