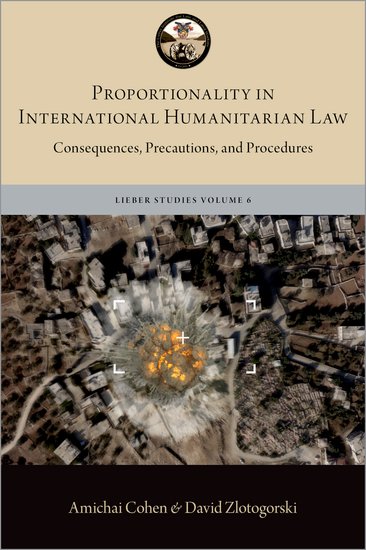 In Proportionality in International Humanitarian Law, Amichai Cohen and David Zlotogorski offer a fresh and comprehensive look at the principle of proportionality. They discuss various areas in which there are disagreements over the way in which proportionality should be applied and offer original solutions to existing debates.

The principle of proportionality is one of the corner-stones of international humanitarian law. Almost all states involved in armed conflicts recognize that launching an attack which may cause incidental harm to civilians that exceeds the direct military advantage anticipated from the attack is prohibited. This prohibition is included in military manuals, taught in professional courses, and accepted as almost axiomatic. And yet, the exact meaning of the principle is
vague. Almost every issue, from the most elementary question of how to compare civilian harm and military advantage, to the obligation to employ accurate but expensive weapons, is disputed. Controversy is especially rife regarding asymmetrical conflicts, in which many modern democracies are involved.
How exactly should proportionality be implemented when the enemy is not an army, but a non-state-actor embedded within a civilian population? What does it mean to use precautions in attack, when almost every attack is directed at objects that are used for both military and civilian purposes? This monograph provides a sustained analysis of two foundational principles of English property law: the principle of relative title and the principle that possession is a source of title. It examines several central concepts in the law of property, including possession and ownership. In Meltdown, Jorge Daniel Taillant explains the ways glaciers influence our ecosystem and what we need to know about a changing climate. He takes readers deep into the cryosphere and explains how glacier melt will impact the way we live.

The Collapse of Constitutional Remedies In The Collapse of Constitutional Remedies, Aziz Z. Huq examines what happens when our constitutional rights are violated. Many people think that federal courts will step in then and provide a remedy.