The Ocean of Inquiry

Niscaldas and the Premodern Origins of Modern Hinduism 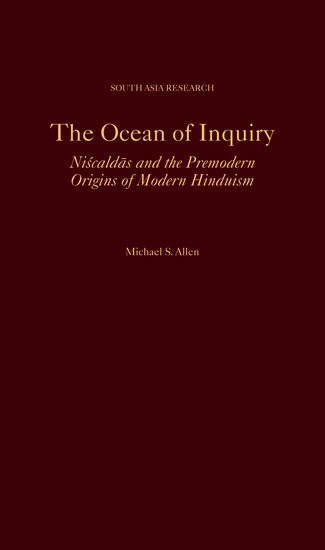 The Ocean of Inquiry

Niscaldas and the Premodern Origins of Modern Hinduism

This book argues for the importance of vernacular Vedanta and draws attention to the late scholastic period of Indian philosophy. Focusing on The Ocean of Inquiry of Niscaldas (ca. 1791 - 1863)—a work once referred to as the most influential book in India—the present book highlights the author's vision of intellectual inquiry as a spiritual practice and argues for the relevance of scholastic traditions to the emergence of modern Hinduism.

Advaita Vedanta is one of the best-known schools of Indian philosophy, but much of its history—a history closely interwoven with that of medieval and modern Hinduism—remains surprisingly unexplored. This book focuses on a single remarkable work and its place within that history: The Ocean of Inquiry, a vernacular compendium of Advaita Vedanta by the North Indian monk Niscaldas (ca. 1791 - 1863). Though not well known today, Niscaldas's work was once
referred to by Vivekananda (himself a key figure in the shaping of modern Hinduism) as the most influential book in India.

The present book situates The Ocean of Inquiry as representative of both a neglected genre (vernacular Vedanta) and a neglected period (ca. 17th-19th centuries) in the history of Indian philosophy. It argues that the rise of Advaita Vedanta to a position of prestige began well before the period of British rule in India, and that vernacular texts like The Ocean of Inquiry played an important role in popularizing Vedantic teachings. It also offers a new appraisal of the period of late
Advaita Vedanta, arguing that it should not be seen as one of barren scholasticism. For thinkers like Niscaldas, intellectual “inquiry” (vicara) was not an academic exercise but a spiritual practice-indeed, it was the central practice on the path to liberation. The book concludes by arguing that without
understanding both vernacular Vedanta and the scholasticism of the period, one cannot fully understand the emergence of modern Hinduism.