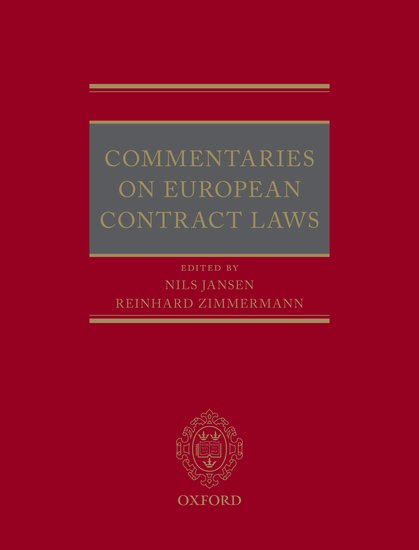 Written by a series of experts in European contract law, this work manifests itself as a set of comprehensive historical and comparative commentaries, providing the basis for understanding and evaluating international texts, and for assessing to what extent they restate European law in a credible and appropriate manner.

The book provides rule-by-rule commentaries on European contract law (general contract law, consumer contract law, the law of sale and related services), dealing with its modern manifestations as well as its historical and comparative foundations.

The present book adopts a broad perspective and an integrative approach. All relevant reference texts (from the CISG to the Draft Common European Sales Law) are critically examined and compared with each other. As far as the acquis commun (ie the traditional private law as laid down in the national codifications) is concerned, the Principles of European Contract Law have been chosen as a point of departure. The rules contained in that document have, however, been complemented with some chapters, sections, and individual provisions drawn from other sources, primarily in order to account for the quickly growing acquis communautaire in the field of consumer contract law.

In addition, the book ties the discussion concerning the reference texts back to the pertinent historical and comparative background; and it thus investigates whether, and to what extent, these texts can be taken to be genuinely European in nature, ie to constitute a manifestation of a common core of European contract law. Where this is not the case, the question is asked whether, and for what reasons, they should be seen as points of departure for the further development of European contract law.

8: Non-Performance and Remedies in General

19: Obligations of the Parties to a (Related) Service Contract

Two major legal trends of recent decades have brought civil procedure within the purview of comparative law. First, the complex international legal relationships created by supranational and intergovernmental organizations often require practitioners to be familiar with legal procedures in other countries.

This is the first and only publication to provide comprehensive coverage of national laws on conflict of laws, now more commonly referred to as private international law. It presents country-by-country national monographs dealing with the statutes, regulations and case law each country applies to cases involving transnational issues in, e.g., business, family or inheritance law.

Dicey, Morris & Collins on the Conflict of Laws

Renowned worldwide as the foremost authority on private international law, Dicey, Morris & Collins on the Conflict of Laws explains the rules, principles and practice that determine how the law of England and Wales relates to other legal systems.