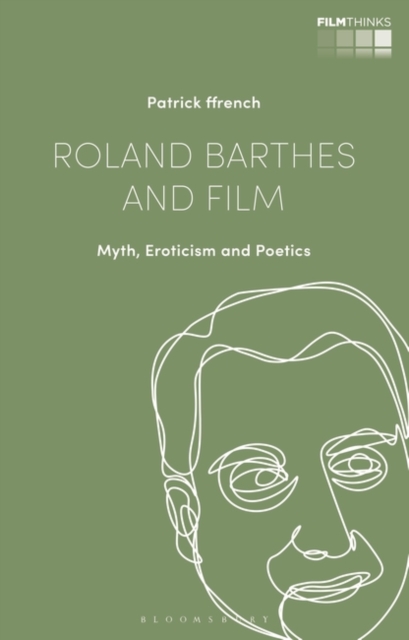 Suspicious of what he called the spectator's "sticky" adherence to the screen, Roland Barthes had a cautious attitude towards cinema. Falling into a hypnotic trance, the philosopher warned, an audience can become susceptible to ideology and "myth".

Suspicious of what he called the spectator's "sticky" adherence to the screen, Roland Barthes had a cautious attitude towards cinema. Falling into a hypnotic trance, the philosopher warned, an audience can become susceptible to ideology and "myth". In this book, Patrick Ffrench explains that although Barthes was wary of film, he engaged deeply with it. Barthes' thought was, Ffrench argues, punctuated by the experience of watching films - and likewise his philosophy of photography, culture, semiotics, ethics and theatricality have been immensely important in film theory. Focusing particularly on the essays 'The Third Meaning' and 'On Leaving the Cinema' and the acclaimed book Camera Lucida, Ffrench examines Barthes' writing and traces a persistent interest in films and directors, from Fellini and Antonioni, to Eisenstein, the Marx Brothers and Hitchcock. Ffrench explains that although Barthes found pleasure in "leaving the cinema" - disconnecting from its dangerous allure by a literal exit or by forcefully breaking the trance - he found value in returning to the screen anew. Barthes delved beneath the pull of progressing narrative and the moving image by becoming attentive to space and material aesthetics. This book presents an invaluable reassessment of one of the most original and subtle thinkers of the twentieth-century: a figure indebted to the movies Lashing rain over the sea, sunbeams breaking through storm clouds and bare landscapes with the occasional lonely tree here and there: all of these abound in Saskia Boelsums' landscape photographs. Her photos are overwhelming and picturesque. Detailed and accurate information on the spatial distribution of individual species over large spatial extents and over multiple time periods is critical for rapid response and eﬀective management of environmental change. The ninth edition of Langford's Advanced Photography is completely updated to cover the art of photography with the latest improvements in gear and post-processing software and techniques, as well as business strategies for the ever-changing landscape, making it the only advanced photography guide a serious student or aspiring professional will ever need.