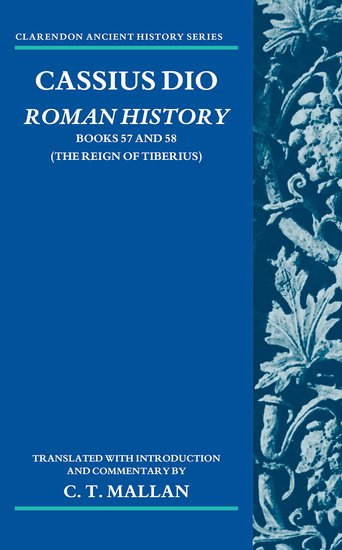 Books 57 and 58 of Cassius Dio's Roman History comprise one of the most important accounts of the reign of the emperor Tiberius (AD 14-37) to have survived from antiquity. This volume provides a new translation and commentary on these books alongside a general introduction offering an overview of Cassius Dio's approach to history.

This volume provides a new translation of Books 57 and 58 of Cassius Dio's Roman History and the 'fragments' of these books preserved in later Byzantine epitomes, as well as the first English language commentary to examine them in their entirety. Dio's Roman History covers almost 1,000 years from the founding of Rome up to the early third century AD, with Books 57 and 58 focusing on the reign of the emperor Tiberius (AD 14-37): his account of this
period is one of the most important to have survived from antiquity, not least as it preserves a historiographical tradition in some ways distinct from that of Tacitus and Suetonius. These books also reveal something of his authorial preoccupations and present a glimpse into the mind of the historian, and especially
into his understanding of the mechanics of imperial government.

The focus of the commentary is both historical and historiographical, in so far as it aims to illuminate not only issues arising from Dio's account of the Tiberian principate, but also to reveal the unity of his work and literary programme: a series of appendices complement the analysis by providing discussion of some of the key historical problems surrounding Dio and the reign of Tiberius. The translation (the first since the Loeb Classical Library edition of E. Cary) aims for both clarity and
accuracy, and particular care has been taken to separate the various textual traditions that have been used to reconstruct the lost portions of Dio's text. An accompanying general introduction offers an accessible overview of Cassius Dio's approach to history based on the latest research in the
field, and will be of particular use to graduate and undergraduate students coming to the text for the first time.