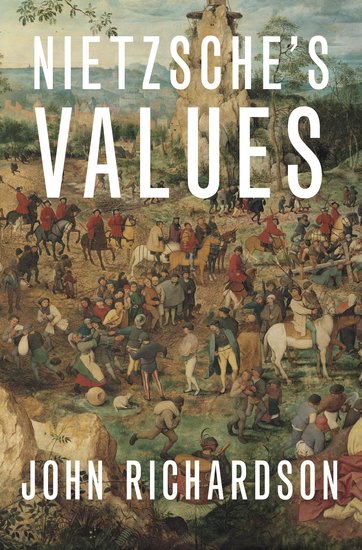 In this book John Richardson argues for centering the concept of values in the study of Nietzsche's philosophical thinking. He identifies twelve of Nietzsche's key concepts, and organizes them into three sections: the first two outline how values influence human behavior and self-conception, while the third presents new values Nietzsche himself defines in response to his previous critiques.

John Richardson here organizes Nietzsche's thinking around the central and unifying concept of values. Richardson maps in detail Nietzsche's arguments, which crucially distinguish three basic ways of valuing.The first is the valuingNietzsche attributes to all living things, and to us humans in our bodies; Nietzsche insists that we already value in our drives and affects. The second isour distinctively human valuing, which we carry out as subjects and agents; these
conscious and worded values are superimposed on those bodily ones, in ways Nietzsche finds deeply problematic. The third is the new way of valuing that Nietzsche offers as his lesson from that diagnosis and critique of our human values; these new values are centered on a universal affirmation or "Yes,"
epitomized in the thought of eternal return.Each of the book's twelve chaptersexamines a different aspect of one of these ways of valuing, showing the complexity of Nietzsche's thinking on its topic, but also its unity and consistency. Incorporating recent advances in philosophical scholarship on Nietzsche, Richardson's thought-provoking new interpretation will serve as a vital updated reference point for future work.