How Militaries Change in Wartime 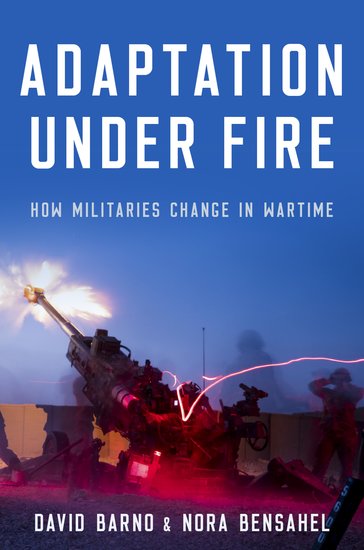 How Militaries Change in Wartime

Militaries that can rapidly adapt to unexpected battlefield challenges are more likely to win wars, and those that cannot are more likely to lose. In Adaptation under Fire, David Barno and Nora Bensahel identify the characteristics that make militaries more adaptable, illustrated through historical and contemporary examples.

Every military must prepare for future wars despite not really knowing the shape such wars will ultimately take. As former U.S. Secretary of Defense Robert Gates once noted: "We have a perfect record in predicting the next war. We have never once gotten it right." In the face of such great uncertainty, militaries must be able to adapt rapidly in order to win. Adaptation under Fire identifies the characteristics that make militaries more adaptable,
illustrated through historical examples and the recent wars in Iraq and Afghanistan.

Authors David Barno and Nora Bensahel argue that militaries facing unknown future conflicts must nevertheless make choices about the type of doctrine that their units will use, the weapons and equipment they will purchase, and the kind of leaders they will select and develop to guide the force to victory. Yet after a war begins, many of these choices will prove flawed in the unpredictable crucible of the battlefield. For a U.S. military facing diverse global threats, its ability to adapt
quickly and effectively to those unforeseen circumstances may spell the difference between victory and defeat.

Barno and Bensahel start by providing a framework for understanding adaptation and include historical cases of success and failure. Next, they examine U.S. military adaptation during the nation's recent wars, and explain why certain forms of adaptation have proven problematic. In the final section, Barno and Bensahel conclude that the U.S. military must become much more adaptable in order to address the fast-changing security challenges of the future, and they offer recommendations on how to do
so before it is too late.