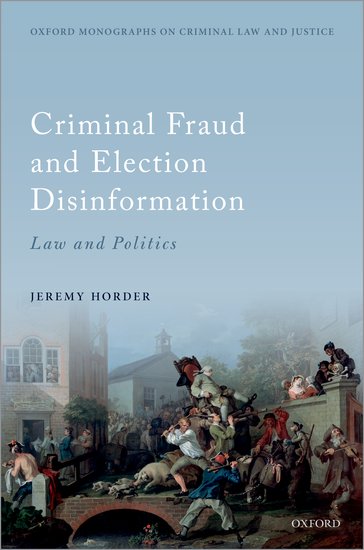 Criminal Fraud and Election Disinformation is about the state's approach to fraud and distortion of the truth in politics, especially during election campaigns. Deliberate mischaracterisation of political opponents and their policies has always been a part of politics; however, lying, dishonesty, and distortion of the facts remain morally wrong and have the potential to obstruct important political interests. For example, a false or misleading claim
publicised about an election candidate may lead someone to lose an election that they might otherwise have won. So, does-and should-the law seek to provide protection from the risk of this happening, by directly prohibiting the making of false or misleading political claims, or by obliging internet platforms to
censor such content?

In attempting to answer this question, Jeremy Horder draws a key distinction between what is called 'political viewpoint' fraud and 'electoral participation' fraud. In the interests of protecting freedom of speech, false or misleading claims (disinformation) involving political viewpoint content should be tolerated, not only by the criminal law but also by the internet platforms which host political content. By contrast, in the interests of preserving the integrity of democratic electoral
processes, disinformation involving electoral participation information should be prohibited by the criminal law and censored by internet platforms. This book explains how the criminal law in various jurisdictions frequently prohibits false or misleading political claims falling into both categories of
disinformation, instead of concentrating on electoral participation fraud. By contract, the right response to political viewpoint disinformation is the provision of more information that challenges people to question their beliefs and prejudices.