Studies on the Text of Seneca's De beneficiis 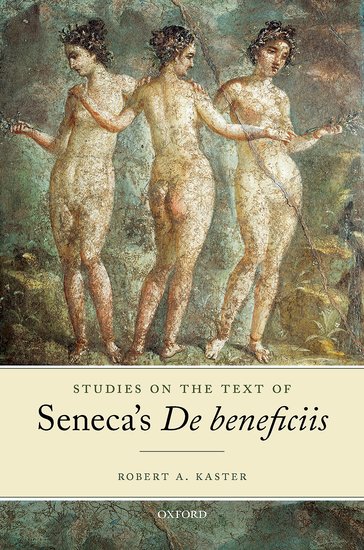 Studies on the Text of Seneca's De beneficiis

Beschrijving Studies on the Text of Seneca's De beneficiis

Studies on the Text of Seneca's De beneficiis is a companion volume to Kaster's Oxford Classical Texts critical edition of Seneca's De beneficiis, the first new edition in nearly a century. De beneficiis is the most detailed treatment surviving from antiquity of the proper ways to show favour to others and to express gratitude when one has been favoured. After a survey of the documentary resources (medieval and Renaissance
manuscripts and earlier printed editions) on which our knowledge of the text depends, the core of the book-seven chapters, one for each of the treatise's seven books—treats 200 passages where the Latin text is or has been thought to be corrupt and clarifies the reasons for favouring the reading adopted in the new edition. Three appendices
treat further matters of detail. Three indexes detailing passages discussed or cited, personal names, and manuscripts and editions provide a useful guide for the reader. This is the third and final volume of a new verse translation of the complete plays of Aristophanes by Stephen Halliwell. The translations combine accuracy with an attempt to capture the rich dramatic and literary qualities of Aristophanic comedy. This book examines the Greek genre of dialogue in the period after the death of Plato, between the mid-fourth century BCE and the mid-first century CE.

The Archive of a Ugandan Missionary Reverend Apolo Kivebulaya was a clergyman in the Native Anglican Church of Uganda, becoming a teacher after his 1895 baptism. His writing illustrates a literate Christian identity formed away from centres of power, while oral and written accounts about him show the responses of African admirers and how Christianity influenced their societies.