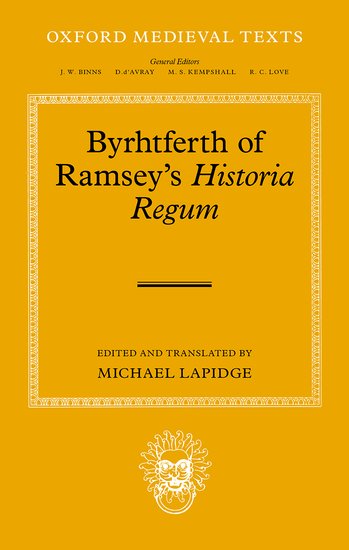 The first scholarly edition of Byrhtferth's Historia regum, an important source for the early history of Anglo-Saxon England from 560 to 887 AD. The Latin text is provided with facing-page English translation, and extensive annotation explains the significance of Byrhtferth's references to historical events (many of which are unrecorded elsewhere).

During the past generation, Byrhtferth of Ramsey (c. 970 - c. 1020) has emerged as one of the principal authors of late Anglo-Saxon England, whose writings - in both Latin and Old English - are among the most important sources for our understanding of early English history. This work, the Historia regum, is transmitted anonymously in the single manuscript which preserves it; but Byrhtferth's idiosyncratic and individual Latin style allows certain
identification of Byrhtferth as its author.

The work is in four parts, and treats the history of the major Anglo-Saxon kingdoms (Kent, Northumbria, Mercia, and Wessex) during the period 560 to 887. The Latin text is accompanied by facing-page English translation, and provided with extensive annotation intended to explain the many references to historical events (many of them unrecorded elsewhere) in the text. The Introduction treats the sources on which Byrhtferth drew in compiling this work, and provides full analysis of Byrhtferth's
idiosyncratic Latin style. The edition is intended to be a companion volume to Byrhtferth of Ramsey: the Lives of St Oswald and St Ecgwine, published as an Oxford Medieval Text edition in 2009.