The Rise of Mass Advertising

Law, Enchantment, and the Cultural Boundaries of British Modernity 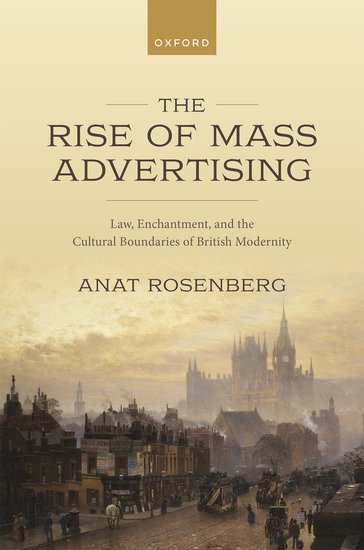 The Rise of Mass Advertising

Law, Enchantment, and the Cultural Boundaries of British Modernity

Beschrijving The Rise of Mass Advertising

The Rise of Mass Advertising is a first cultural legal history of advertising in Britain, tracing the rise of mass advertising c.1840-1914 and its legal shaping. The emergence of this new system disrupted the perceived foundations of modernity. The idea that culture was organized by identifiable fields of knowledge, experience, and authority came under strain as advertisers claimed to share values with the era's most prominent fields, including news, art,
science, and religiously inflected morality. While cultural boundaries grew blurry, the assumption that the world was becoming progressively disenchanted was undermined, as enchanted experiences multiplied with the transformation of everyday environments by advertising. Magical thinking, a dwelling in
mysteries, searches for transfiguration, affective connection between humans and things, and powerful fantasy disrupted assumptions that the capitalist economy was a victory of reason.

The Rise of Mass Advertising examines how contemporaries came to terms with the disruptive impact by mobilizing legal processes, powers, and concepts. Law was implicated in performing boundary work that preserved the modern sense of field distinctions. Advertising's cultural meanings and its organization were shaped dialectically vis-à-vis other fields in a process that mainstreamed and legitimized it with legal means, but also construed it as an inferior simulation of the values
of a progressive modernity, exhibiting epistemological shortfalls and aesthetic compromises that marked it apart from adjacent fields. The dual treatment meanwhile disavowed the central role of enchantment, in what amounted to a normative enterprise of disenchantment. One of the ironies of this enterprise was that
it ultimately drove professional advertisers to embrace enchantment as their peculiar expertise.