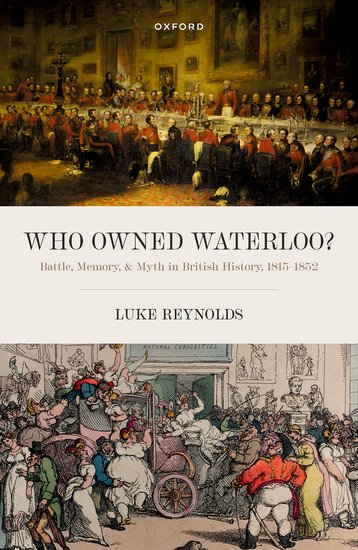 After the Battle of Waterloo, Britain actively incorporated the victory into their national identity. Who Owned Waterloo? demonstrates that Waterloo's significance to Britain's national psyche resulted in a different battle: one in which civilian and military groups fought to establish claims on different aspects of the battle and its remembrance.

Between 1815 and the Duke of Wellington's death in 1852, the Battle of Waterloo became much more than simply a military victory. While other countries marked the battle and its anniversary, only Britain actively incorporated the victory into their national identity, guaranteeing that it would become a ubiquitous and multi-layered presence in British culture. By examining various forms of commemoration, celebration, and recreation, Who Owned Waterloo?
demonstrates that Waterloo's significance to Britain's national psyche resulted in a different kind of war altogether: one in which civilian and military groups fought over and established their own claims on different aspects of the battle and its remembrance. By weaponizing everything from memoirs, monuments,
rituals, and relics to hippodramas, panoramas, and even shades of blue, veterans pushed back against civilian claims of ownership; English, Scottish, and Irish interests staked their claims; and conservatives and radicals duelled over the direction of the country. Even as ownership was contested among certain groups, large portions of the British population purchased souvenirs, flocked to spectacles and exhibitions, visited the battlefield itself, and engaged in a startling variety of forms of
performative patriotism, guaranteeing not only the further nationalization of Waterloo, but its permanent place in nineteenth century British popular and consumer culture.