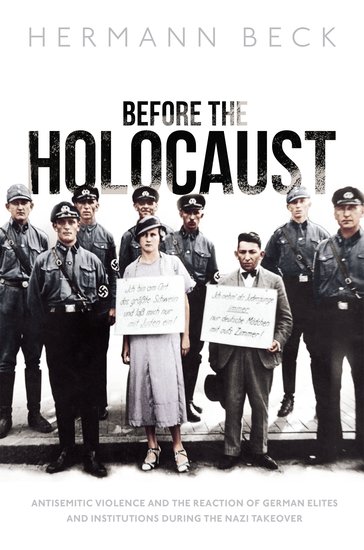 As the Nazis staged their takeover in 1933, instances of antisemitic violence began to soar. Hermann Beck examines the types of antisemitic violence experienced in the prelude to the Holocaust, as well as the reactions of the German institutions and elites who still had some capacity to protest these Nazi attacks, but often chose to remain silent.

Beschrijving Before the Holocaust

As the Nazis staged their takeover in 1933, instances of antisemitic violence began to soar.

While previous historical research assumed that this violence happened much later, Hermann Beck counteracts this, drawing on sources from twenty German archives, and focussing on this early violence, and on the reaction of German institutions and the elites who led them.

Before the Holocaust examines the antisemitic violence experienced in this period - from boycotts, violent attacks, robbery, extortion, abductions, and humiliating 'pillory marches', to grievous bodily harm and murder - which has hitherto not been adequately recognized. Beck then analyses the reactions of those institutions that still had the capacity to protest against Nazi attacks and legislative measures - the Protestant Church, the Catholic Church, the bureaucracies, and Hitler's
conservative coalition partner, the DNVP - and the mindset of the elites who led them, to determine their various responses to flagrant antisemitic abuses. Individual protests against violent attacks, the April boycott, and Nazi legislative measures were already hazardous in March and April 1933, but
established institutions in the German State and society were still able to voice their concerns and raise objections. By doing so, they might have stopped or at least postponed a radicalization that eventually led to the pogrom of 1938 (Kristallnacht) and the Holocaust.