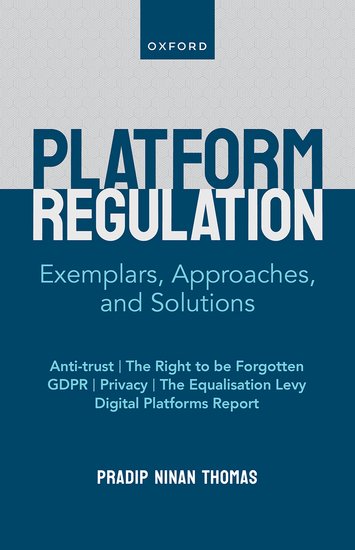 This volume provides an introduction to some of the issues and challenges related to platform regulation and the conundrums and paradoxes involved. It highlights regulatory responses from four jurisdictions - the European Union, USA, India, and Australia.

Over the last decade or two, a handful of powerful, monopolist platforms have embraced our lives worldwide. They intermediate our socialities and relationships, what we search for on the Internet, and our online purchases. We are living in a global economy that is fuelled by the monetization of affect. One is now only too aware that various platforms are very systematically using the advantages stemming from algorithmic power and platform externalities to mine and
privatize personal data that is in turn sold to advertisers who target not just the present but also future economic behaviours of users. One now also hears of the complicity of some of these platforms in data breaches that have contributed to the making and unmaking of political fortunes of key
political parties across geographies. This unprecedented power of platforms is, however, being challenged today. Data breaches, evidence of platform manipulations, platform complicities with state surveillance, and their monopolist behaviours and its consequences for competition and data privacy have become the basis for regulatory responses from governments throughout the world. National and regional courts of law have collected a lot of evidence on myriad forms of platform illegalities that
discriminate against competitors and that point to the privatization of personal data on a global scale. The proposed volume provides an introduction to some of the issues and challenges related to platform regulation, the conundrums and paradoxes involved, and also to some of the well-conceived and
manageable regulatory pathways currently being explored by national and regional governments. It highlights regulatory responses from four jurisdictions - the European Union, USA, India, and Australia.

The Problem of Democracy 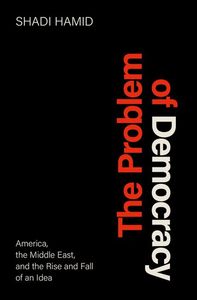 What happens when democracy produces "bad" outcomes? Is democracy good because of its outcomes or despite them? This "democratic dilemma" is one of the most persistent, vexing problems for America abroad, particularly in the Middle Eastwe want democracy in theory but not necessarily in practice. In Support the Troops, Katharine M. Millar provides an empirical overview of "support the troops" discourses in the US and UK during the early years of the global war on terror (2001-2010). As Millar argues, seemingly stable understandings of the relationship between military service, citizenship, and gender norms are being unsettled by changes in warfare.

The Nexus of Naval Modernization in India and China 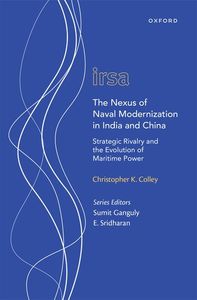 Through a close examination of scholarly works, government documents, and over 60 in-depth focused interviews with experts based in India, China, Australia and the U.S. the author argues that, while strategic rivalry is not the only driver of naval modernization, it is the most compelling explanation.