Jewish Law among Jews and Christians in Early Modern Europe 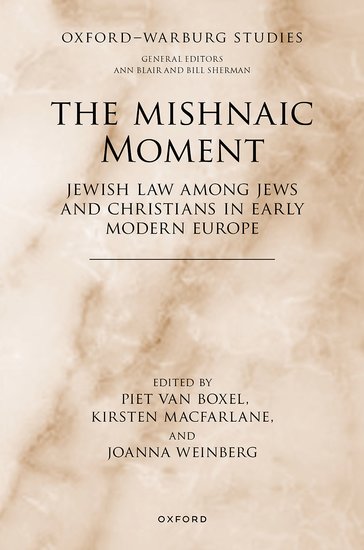 Jewish Law among Jews and Christians in Early Modern Europe

The Mishnaic Moment describes a remarkable encounter between Jews and Christians in seventeenth-century northern Europe, where scholars from both communities were printing, producing, and discussing commentaries on the canonical corpus of Jewish Law, the Mishnah.

This collection of essays treats a topic that has scarcely been approached in the literature on Hebrew and Hebraism in the early modern period. In the seventeenth century, Christians, especially Protestants, studied the Mishnah alongside a host of Jewish commentaries in order to reconstruct Jewish culture, history, and ritual, shedding new light on the world of the Old and New Testaments. Their work was also inextricably dependent upon the vigorous Mishnaic studies
of early modern Jewish communities. Both traditions, in a sense, culminated in the monumental production in six volumes of an edition and Latin translation of the Mishnah published by Guilielmus Surenhusius in Amsterdam between 1698 and 1703. Surenhusius gathered up more than a century's worth of
Mishnaic studies by scholars from England, Germany, the Netherlands, and Sweden, as well as the commentaries of Maimonides and Obadiah of Bertinoro (c. 1455-c.1515), but this edition was also born out of the unique milieu of Amsterdam at the end of the seventeenth century, a place which offered possibilities for cross-cultural interactions between Jews and Christians. With Surenhusius's great volumes as an end point, the essays presented here discuss for the first time the multiple ways in
which the canonical text of Jewish law, the Mishnah (c.200 CE), was studied by a variety of scholars, both Jewish and Christian, in early modern Europe. They tell the story of how the Mishnah generated an encounter between different cultures, faiths, and confessions that would prove to be enduringly
influential for centuries to come.