Cuba the Struggle for Independence Cuba the Struggle for Independence

José Martí occupies a central place in Latin American letters, and he is an unparalleled foundational figure in Cuban culture. Martí's writing shaped a hemispheric consciousness in the Americas, and as national poet and patriotic "apostle," he is revered by generations of Cubans everywhere. As essayist, journalist, and revolutionary, Martí fought for Cuban independence and helped defend the ideal of Latin American autonomy against empires old
and new. This ground-breaking two-volume work offers the most comprehensive collection of Mart´i's prose work available in English. Where recent translations have offered selective anthologies of Martí's writing, this edition offers a key archive of essays, journalism, speeches, political documents, and historic
correspondence, many translated for the first time. The first volume gathers essential texts and letters that have shaped Cuban history, nationalism, and political ideology, and which challenged and defined the course of revolutionary struggle. The second volume offers a comprehensive selection of Martí's vision of the Americas, combining his reflections on Latin American history, culture and political economy, and his critical observations on the modernity and upheavals of the United
States in the late nineteenth century.
Volume One, Cuba: The Struggle for Independence includes two main sections. Just Wars and Revolutions represents Martí's writings about Spanish colonial oppression, Cuban insurrections and the independence wars, revealing his anxieties about revolutionary organization and leadership, and his reflections on military power, civil society, and nationalist struggle. Building the Patria in Exile reflects Mart´i's efforts to build Cuban from exile, and his
exhortation that the patria should be founded on secular institutions, republican ideals and social enfranchisement and not merely political or military expediency. The selections reflect his concerns about U.S. imperialism and annexationist designs, his engagement and dialogue with educational and beneficent organizations, his focus on women
as builders and mothers of the nation, and his crafting of a national genealogy of poets and heroes. 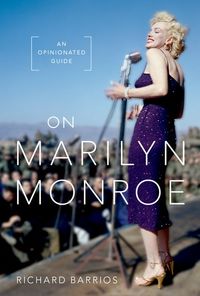 In this lively guide, Richard Barrios looks beyond the ballyhoo and legend at Monroe's best-known films, and some that even today remain obscure. Besides her films, it also addresses the work she did on television and the stage, as well as her underrated abilities as a vocalist.