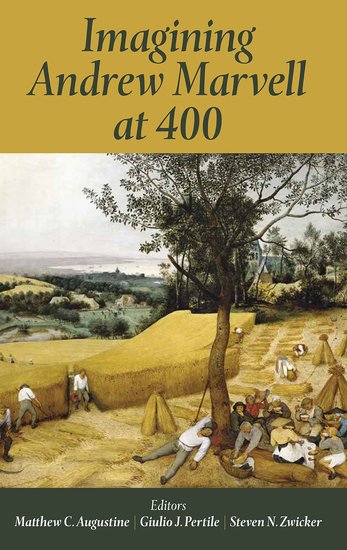 To celebrate the work of Andrew Marvell (1621-1678) in the quatercentenary year of his birth, Augustine, Pertile and Zwicker combine the best historical scholarship with a varied and ambitious critical programme, as contributors map the enduring pleasures and challenges of reading and re-reading this shrewd and often brilliant writer.

Beschrijving Proceedings of the British Academy: Imagining Andrew Marvell at 400

Augustine, Pertile and Zwicker celebrate the work of Andrew Marvell (1621-1678) in the quatercentenary year of his birth, combining the best historical scholarship with a varied and ambitious programme of cognitive, affective, and aesthetic inquiry. The essays have been specially commissioned for the quatercentenary and include the work of a range of scholars from Britain and North America. Acknowledged masterpieces such as the 'Horatian Ode', 'The Garden', and 'Upon
Appleton House' are here read in light of historical and material evidence that has emerged in recent decades. At the same time, the volume offers many fresh points of entry into Marvell's work, with particular attention to the poet's lyric economies, Marvell's engagement with popular print, and,
not least, the polyglot and transnational dimensions of his writing. The quatercentenary also represents an important anniversary for Marvell studies, marking one hundred years since T. S. Eliot's appreciation of the poet inaugurated modern Marvell criticism. As Imagining Andrew Marvell at 400 reassesses Marvell's writings it also reflects on the profession of English literature, taking stock of the discipline itself, where it has been and where it might be going as scholars continue
to map the pleasures and challenges of reading and re-reading Andrew Marvell.