On Moral Criticisms of Artwork On Moral Criticisms of Artwork

What grounds a judgment that a work of art is immoral? This book argues that we cannot judge artworks morally in the same way that we judge people. What’s more, there is no direct influence from moral judgments to aesthetic judgments: it is possible for artworks to be both immoral and beautiful.

Dangerous Art takes up the problem of judging works of art using moral standards. When we think that a work is racist, or morally dangerous, what do we mean? James Harold approaches the topic from two angles. First, he takes up the moral question on its own. What could it mean to say that a work of art (rather than, say, a human being) is immoral? He then steps back and examines how moral evaluation fits into the larger task of evaluating artworks.
If an artwork is immoral, what does that tell us about how to value the artwork?

By tackling the issue from both sides, Harold demonstrates how many of the reasons previously given for thinking that works of art are immoral do not stand up to careful scrutiny. While many philosophers of art have simply assumed that artworks can be evaluated morally and proceeded as though such assessments were unproblematic, Harold highlights the complexities and difficulties inherent in such evaluations. He argues that even when works of art are rightly condemned from a moral point of
view, the relationship between that moral flaw and their value as artworks is complex. He instead defends a moderate, skeptic version of autonomism between morality and aesthetics. Employing figures and ideas from ancient Greece, classical China, and the Harlem Renaissance, as well as William Styron's
novel The Confessions of Nat Turner, he argues that we cannot judge artworks in the same way that we judge people on moral grounds. In this sense, we can judge an artwork to be both wicked and beautiful; nothing requires us to judge an artwork more or less valuable aesthetically just because we judge it to be morally bad or good. Taking up complex issues at the intersection of art and ethics, Dangerous Art will appeal to philosophers and students interested in art, aesthetics,
moral philosophy, and philosophy of mind. 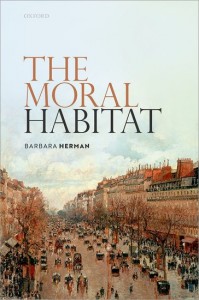 The Moral Habitat offers a new and systematic interpretation of Kant's moral and political philosophy. Herman introduces the idea of a moral habitat to examines the dynamic system of duties that exists between individuals and civic institutions.

The Riddle of Vagueness 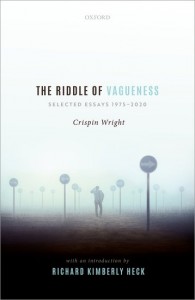 What should we make of the vagueness we find in our language and thought? This has been one of the most debated questions in philosophy in recent decades. Crispin Wright has been a key figure in this area since the 1970s, and now at last his highly influential work on the topic is drawn together in a book. 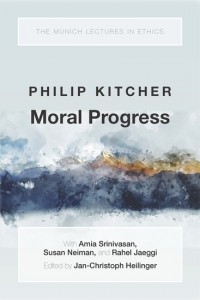 This inaugural volume in the Munich Lectures in Ethics series presents lectures by noted philosopher Philip Kitcher. In these lectures Kitcher develops further the pragmatist approach to moral philosophy, begun in his book The Ethical Project.