Squatters, Statesmen, and the Antebellum Rupture of American Democracy 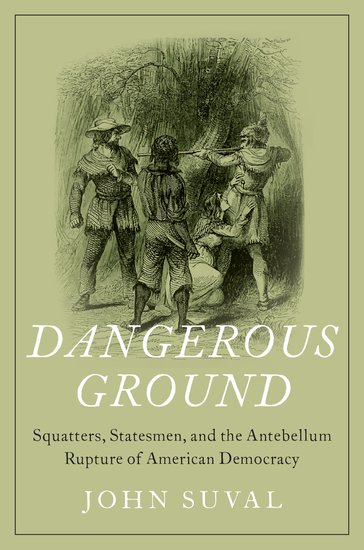 Squatters, Statesmen, and the Antebellum Rupture of American Democracy

Dangerous Ground examines how white squatters in the American West came to occupy a central and destabilizing position in US political culture in the decades culminating in the Civil War.

The squatter—defined by Noah Webster as "one that settles on new land without a title"—had long been a fixture of America's frontier past. In the antebellum period, white squatters propelled the Jacksonian Democratic Party to dominance and the United States to the shores of the Pacific. In a bold reframing of the era's political history, John Suval explores how Squatter Democracy transformed the partisan landscape and the map of North America, hastening clashes
that ultimately sundered the nation.

With one eye on Washington and the other on flashpoints across the West, Dangerous Ground tracks squatters from the Mississippi Valley and cotton lands of Texas, to Oregon, Gold Rush-era California, and, finally, Bleeding Kansas. The sweeping narrative reveals how claiming western domains became stubbornly intertwined with partisan politics and fights over the extension of slavery. While previous generations of statesmen had maligned and sought to contain illegal settlers, Democrats
celebrated squatters as pioneering yeomen and encouraged their land grabs through preemption laws, Indian removal, and hawkish diplomacy. As America expanded, the party's power grew. The US-Mexican War led many to ask whether these squatters were genuine yeomen or forerunners of slavery expansion. Some
northern Democrats bolted to form the Free Soil Party, while southerners denounced any hindrance to slavery's spread. Faced with a fracturing party, Democratic leaders allowed territorial inhabitants to determine whether new lands would be slave or free, leading to a destabilizing transfer of authority from Congress to frontier settlers. Squatters thus morphed from agents of Manifest Destiny into foot soldiers in battles that ruptured the party and the country.

Deeply researched and vividly written, Dangerous Ground illuminates the overlooked role of squatters in the United States' growth into a continent-spanning juggernaut and in the onset of the Civil War, casting crucial light on the promises and vulnerabilities of American democracy.