The EPA and the Economics of Environmental Protection 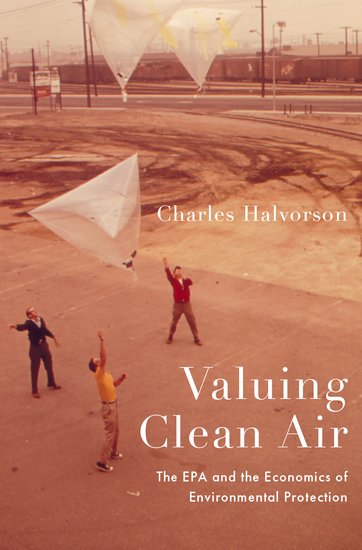 The EPA and the Economics of Environmental Protection

Valuing Clean Air explains why and how environmental regulation came to be a critical site in the evolution of federal governance in both idea and practice in American politics and society.

The passage of the Clean Air Act and the creation of the Environmental Protection Agency (EPA) in 1970 marked a sweeping transformation in American politics. In a few short years, the environmental movement pushed Republican and Democratic elected officials to articulate a right to clean air as part of a bevy of new federal guarantees. Charged with delivering on those promises, the EPA represented a bold assertion that the federal government had a responsibility to
protect the environment, the authority to command private business to reduce their pollution, and the capacity to dictate how they did so.

In Valuing Clean Air, Charles Halvorson examines how the environmental concern that propelled the Clean Air Act and the EPA coincided with economic convulsions that shook the liberal state to its core. Business groups, public interest organizations, think tanks, and a host of other actors, including Ralph Nader, wasted little time after the EPA's creation in identifying and trying to pull the new levers of power. As powerful businesses pressed to roll back regulations, elected
officials from both political parties questioned whether the nation could keep its environmental promises. In response, the EPA's staff and leadership practiced a politics of the possible, adopting a monetized approach to environmental value that shielded the agency's rulemaking but sat at odds with environmentalist
notions of natural rights and contributed to the elevation of economics as the language and logic of policy. As Halvorson demonstrates, environmental protection came to serve as a central battleground in larger debates over markets, government, and public welfare.

For anyone who has wondered where cap and trade came from and how environmental activists came to discuss wetlands protection, air pollution, and fracking in the language of cost-benefit analysis, Valuing Clean Air provides an insightful look at a half-century of the making of US environmental policy. Charles Perrings and Ann Kinzig address the broad problem of conservation, the principles that inform conservation choices, and the application of those principles to the management of the natural world.

No Timber Without Trees "Earthscan publishes in association with the International Institute for Environment and Development." Genetic diversity is essential to the security of agriculture. Without the availability of a wide range of plant varieties and the genetic resources they contain, crops cannot adapt to combat the ever-changing threats of pests, diseases and climatic change.