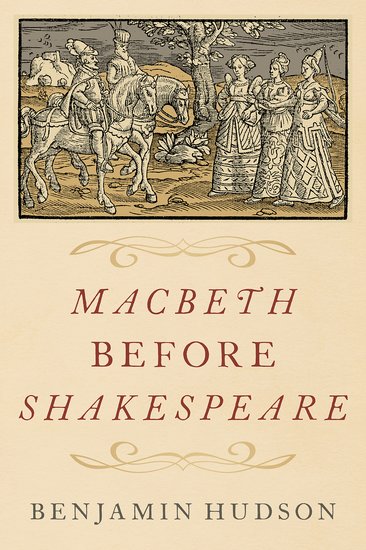 Macbeth before Shakespeare is a history of the medieval King Macbeth and his legend that was the basis for William Shakespeare's Tragedie of Macbeth. It traces the life of the real man and his important innovations, while showing how different legends were created in subsequent eras.

Macbeth is arguably the world's most famous monarch. Both the historical king and the literary character have fascinated writers and audiences for centuries, beginning with the poets who recited their verses at the medieval monarch's court. Macbeth's legend began almost immediately after his death as medieval and Renaissance writers gradually replaced the king with a semi-literary character developed and embroidered to suit their own political and cultural agenda.
The process of transformation culminated in playwright William Shakespeare's The Tragedie of Macbeth.

Investigating the man and the legend, Benjamin Hudson traces the eleventh-century prince's rise to prominence from local warlord to international ruler. Battling Vikings, English, and his fellow Scots, Macbeth was involved in a Dano-Norwegian conflict, made a pilgrimage to Rome, and gave refuge to Norman knights. He was more than a mere warlord. With his queen, Gruoch, the widow of a man who killed Macbeth's father, he was a benefactor of churches. The historical prince was an important
innovator who used new fighting tactics, developed an international outlook to government, and encouraged intellectual pursuits. Hudson also tracks the ways in which popularizers developed the women behind the fictional Lady Macbeth and the weird sisters.

Drawing on centuries of Celtic and Scandinavian sources, popular entertainment, political theory, folklore, and art, Macbeth before Shakespeare recovers the genuine king from the historical record and shows how he was replaced by the legendary monster of ambition.