The Politics of Institutional Change in the Security Sector 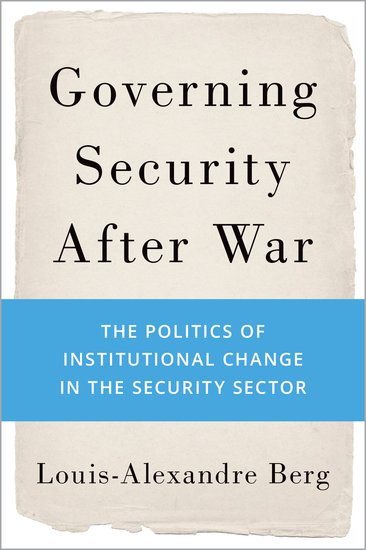 The Politics of Institutional Change in the Security Sector

Security assistance has become the largest component of international peacebuilding and stabilization efforts, and a primary tool for responding to civil war and insurgency. Donors and peacekeepers not only train and equip military and police forces, they also seek to overhaul their structure, management, and oversight. Yet, we know little about why these efforts succeed or fail. Efforts to restructure security forces in Iraq, Libya, South Sudan, Timor-Leste, and the
Democratic Republic of Congo ended amidst factional fighting. Similar efforts in Liberia, Sierra Leone, El Salvador, Mozambique, and Bosnia and Herzegovina helped to transform security forces and underpin peace. What accounts for the mixed outcomes of efforts to restructure security forces after
civil war? What is the role of external involvement on these outcomes?

In Governing Security After War, Louis-Alexandre Berg examines the political dimensions of security governance through systematic, cross-country comparison. Berg argues that the extent to which state policymakers adopt changes to the management and oversight of security forces depends on internal political dynamics, specifically the degree to which leaders need to consolidate power. The different political strategies leaders pursue, in turn, affect opportunities for external actors to
influence institutional changes through means such as conditions on aid, norm diffusion, or day-to-day participation in decision-making.

Drawing on an original dataset of security governance and field research in Liberia, Bosnia and Herzegovina, and Timor-Leste, as well as mini-case studies of Iraq, Afghanistan, South Sudan, and Somalia, Berg draws out novel implications that help explain the recurrence of civil war and the impact of foreign aid on peacebuilding. Moreover, Berg provides practical recommendations for navigating the political challenges of institutional change in conflict-affected countries. Ultimately,
Governing Security After War seeks to explain the success and failure of international assistance in war-torn countries and sheds light on the politics of peacebuilding.