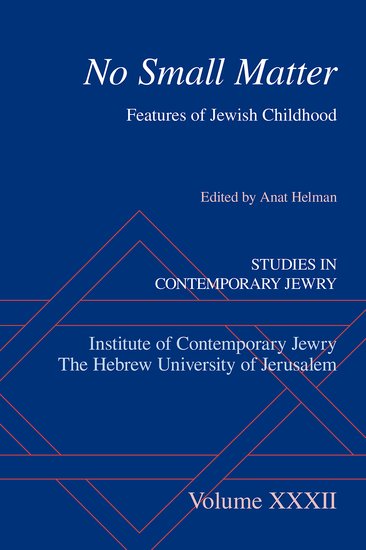 Visiting five continents and covering 220 years, our journey into modern Jewish childhood begins with birth and ends at the time of bar or bat mitzvah. Jewish children, their history and their images, are described by scholars from the fields of demography, history, linguistics, film studies, literature, religious studies, and psychology.

For many centuries Jews have been renowned for the efforts they put into their children's welfare and education. Eventually, prioritizing children became a modern Western norm, as reflected in an abundance of research in fields such as pediatric medicine, psychology, and law. In other academic fields, however, young children in particular have received less attention, perhaps because they rarely leave written documentation. The interdisciplinary symposium in this
volume seeks to overcome this challenge by delving into different facets of Jewish childhood in history, literature, and film.

No Small Matter visits five continents and studies Jewish children from the 19th century through the present. It includes essays on the demographic patterns of Jewish reproduction; on the evolution of bar and bat mitzvah ceremonies; on the role children played in the project of Hebrew revival; on their immigrant experiences in the United States; on novels for young Jewish readers written in Hebrew and Yiddish; and on Jewish themes in films featuring children. Several contributions
focus on children who survived the Holocaust or the children of survivors in a variety of settings ranging from Europe, North Africa, and Israel to the summer bungalow colonies of the Catskill Mountains. In addition to the symposium, this volume also features essays on a transformative Yiddish poem by a Soviet
Jewish author and on the cultural legacy of Lenny Bruce.