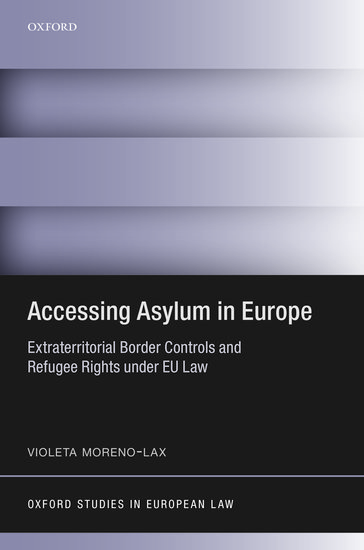 The timely subject matter of this book focuses on the interface between extraterritorial border surveillance and migration management by EU Member States and the rights that asylum seekers acquire from EU law.

Europe is currently experiencing a "refugee crisis", demonstrated by millions of displaced people unseen since World War II. This book examines the interface between the EU's response to irregular flows, in particular the main extraterritorial border and migration controls taken by the Member States, and the rights asylum seekers acquire from EU law.

"Remote control" techniques, such as the imposition of visas, fines on carriers transporting unsatisfactorily documented third-country nationals, and interception at sea are investigated in detail in a bid to assess the impact these measures have on access to asylum in the EU. The book also thoroughly analyses the rights recognised by the EU Charter of Fundamental Rights to persons in need of international protection, inclusive of the principle of non-refoulement, the right to leave any country
including one's own, the right to asylum, and the right to remedies and effective judicial protection.

The fundamental focus of the book is the relationship between the aforementioned border and migration controls and the rights of asylum seekers and, most importantly, how these rights (should) limit the scope of such measures and the ways in which they are implemented. The ultimate goal is to conclude whether the current series of extraterritorial mechanisms of pre-entry vetting is compatible in EU law with the EU rights of forced migrants.