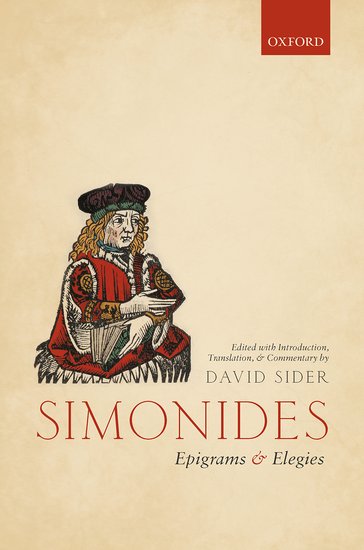 This edition and commentary covers, for the most part, those poems by Simonides written in elegiac distichs now called epigrams and elegies. Each poem and fragment is accompanied by a detailed commentary and translation, where applicable, while a comprehensive general Introduction sets Simonides and his works into their historical context.

Simonides of Ceos, one of the nine lyric poets enshrined in what is conventionally thought of as the Hellenistic Lyric Canon, is a relatively mysterious figure despite his renown in the classical world. Few historical and biographical facts about him have survived, and only fragments of his non-epigrammatic poetry.

This volume is intended to complement Orlando Poltera's full-scale text and commentary on Simonides' lyrics (Schwabe, 2008), offering an up-to-date edition and commentary covering, for the most part, those poems in elegiac distichs now called epigrams and elegies. In addition to these forms, Simonides wrote in a few other non-lyric metrical patterns involving dactyls and iambs: these are also included for the sake of completeness, since they are properly absent from Poltera's edition.

As authenticity is in question for all but a very few of the epigrams ascribed to Simonides, the volume's scope extends to cover every poem ascribed to him in antiquity, including some poems that are surely not by him: these poems have never before been treated in such detail and the large body of scholarship generated by the corpus as a whole is taken into account here for the first time. Each poem and fragment is accompanied by a new English translation, where applicable, and detailed
exegetic line-by-line commentary; a comprehensive general Introduction sets Simonides and his works into their historical context and provides a thorough examination of the textual transmission of the elegies and epigrams.