A Study in Non-Ideal Epistemology

A Study in Non-Ideal Epistemology

Prejudiced beliefs may certainly seem like defective beliefs. But in what sense? Endre Begby argues that it is a mistake to think of prejudice as the result of epistemic irresponsibility: prejudiced belief is often epistemically justified.

Prejudiced beliefs may certainly seem like defective beliefs. But in what sense are they defective? Many will be false and harmful, but philosophers have further argued that prejudiced belief is defective also in the sense that it could only arise from distinctive kinds of epistemic irrationality: we could acquire or retain our prejudiced beliefs only by violating our epistemic responsibilities. It is also assumed that we are only morally responsible for the harms
that prejudiced beliefs cause because, in forming these beliefs in the first place, we are violating our epistemic responsibilities. In Prejudice, Endre Begby argues that these common convictions are misguided. His discussion shows in detail that there are many epistemically justified pathways to
prejudiced belief, and that it is a mistake to lean on the concept of epistemic responsibility to articulate our ethical responsibilities. Doing so unreasonably burdens victims of prejudice with having to show that their victimizers were in a position to know better. Accordingly, Begby provides an account of moral responsibility for harm which does not depend on finding grounds for epistemic blame. This view is supported by a number of examples and case studies at individual, collective, and
institutional levels of decision making. Additionally, Begby develops a systematic platform for "non-ideal epistemology" which would apply to a wide range of other social and epistemic phenomena of current concern, such as fake news, conspiracy theories, science scepticism, and more.

The Right to Higher Education 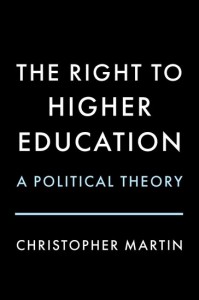 This book argues that all citizens have the right to higher education. Education should not be allocated only to some, but to all those who choose to take it up. Using concepts and ideas from liberal political philosophy, Christopher Martin shows that access to educational goods plays a key role in helping mature citizens realize self-determined goals. Each year, tens of thousands of children are conceived with donated gametes (sperm or eggs). Some know the identity of their donors. Others never will. Questions about what donor-conceived people should know about their genetic progenitors are significant for literally millions of people, including donor-conceived people, their parents, and donors.