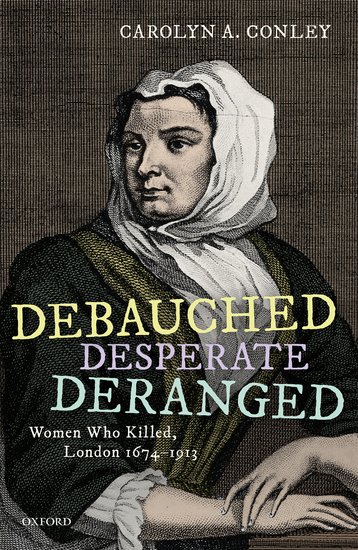 This book examines the over 1400 trials of women accused of homicide in London from 1674-1913, using trial records as well as newspaper, pamphlets and other media to analyse the changing image of the female killer.

Contemporary studies have concluded that women are far less likely to kill than men and that when women do kill, they do so within the family. Debauched, Desperate, Deranged: Women Who Killed, London 1674-1913 examines the evolution of this pattern in the over 1400 trials in which women were prosecuted for homicide in London from the late seventeenth century until just before the First World War. Which deaths were considered homicides and in what
circumstances women were culpable illustrates profound changes in the prevailing assumptions about women. The outcomes of trials and the portrayals of these women in the press illuminate changes in perceptions of women's status and their physical and mental limitations. Debauched, Desperate, Deranged breaks new ground
in existing studies of gender and homicide, using a long time frame to discern which trends are brief anomalies and which represent significant change or continuity.

Debauched, Desperate, Deranged is the first empirical, quantitatively as well as qualitatively based study of women and homicide from the seventeenth century to the twentieth. It presents new and significant conclusions on changing incidence of maternal homicides and the remarkable constancy of spousal homicides.