Writing a War of Words

Andrew Clark and the Search for Meaning in World War One 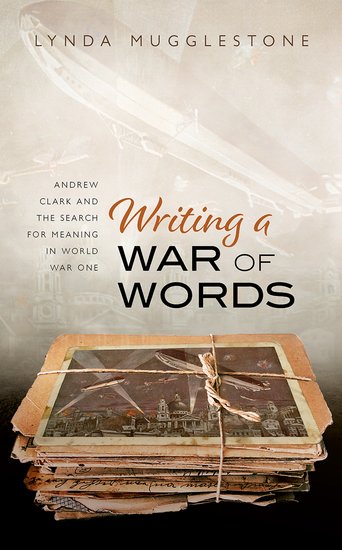 Writing a War of Words

Andrew Clark and the Search for Meaning in World War One

Writing a War of Words is the first investigation of a valuable archive of war-time notebooks documenting changes to the English language on the Home Front. Using unconventional sources, it explores the effect of war on the language of ordinary people, and reflects on the role of language as an interdisciplinary lens on history.

Beschrijving Writing a War of Words

Writing a War of Words is the first exploration of the war-time quest by Andrew Clark - a writer, historian, and volunteer on the first edition of the Oxford English Dictionary - to document changes in the English language from the start of the First World War up to 1919. Clark's unique series of lexical scrapbooks, replete with clippings, annotations, and real-time definitions, reveals a desire to put living language history to the fore, and to
create a record of often fleeting popular use. The rise of trench warfare, the Zeppelinophobia of total war, and descriptions of shellshock (and raid shock on the Home Front) all drew his attentive gaze. The archive includes examples from a range of sources, such as advertising, newspapers, and letters from the Front, as
well as documenting social issues such as the shifting forms of representation as women 'did their bit' on the Home Front. Lynda's Mugglestone's fascinating investigation of this valuable archive reassesses the conventional accounts of language history during this period, recuperates Clark himself as another 'forgotten lexicographer', challenges the received wisdom on the inexpressibilities of war, and examines the role of language as an interdisciplinary lens on history.

Referring to the World This book is a contribution to ongoing debates in the philosophy of language about reference and truth. The ideas discussed have been important not only in philosophy but in logic, linguistics, psychology, computer science and other areas concerned with thought and communication. The Last Language on Earth is the story of Eskayan, a constructed language from the Philippines. Unlike better-known invented languages such as Esperanto or Klingon, Eskayan has now been transmitted from generation to generation within its community for over a century and has come to be regarded by its speakers as the true indigenous language of the island of Bohol. Drawing on an original study of internet users across nine Western democracies, Outside the Bubble offers an unprecedented look at the effects of social media on democratic participation. The book reveals that, for most users, social media do not constitute echo chambers where people only hear what they want to hear.