This dictionary contains more than 50,000 entries, related phrases, idioms and more than 200 illustrations. Like our other Bilingual Dictionaries, this has been specially compiled for learners of English, teachers, translators and general readers.

This dictionary contains more than 50,000 entries, related phrases, idioms and more than 200 illustrations. Like our other Bilingual Dictionaries, this has been specially compiled for learners of English, teachers, translators and general readers.

Words like citizen journalism, e-learning, hate crime, learning disability, newsworthy, road rage, and many more have been taken from current usage of English.
The English base of the dictionary, taken from the Oxford Students Dictionary (2nd Edition) has been adapted for Indian readers.
To make the dictionary more user-friendly detailed de?nitions and one-word equivalents in Tamil have been included for words that needed to be explained further for example, brain drain, electromagnetic, metamorphosis and microwave.
Many words such as computer, microchip, multiplex and software have been written out in Tamil to show that such words have now been included in the language.
Words from the current usage, including Indian English have been added.
A pronunciation guide using the International Phonetic Alphabet (IPA) is given for help in pronunciation.
Helpful notes on grammar, vocabulary and writing have been provided in Tamil.
A separate section on Quick Grammar Reference along with a list of su?xes and pre?xes translated in Tamil, have been added to the appendix for advanced learners of English.

Dangerous Crooked Scoundrels is a history of the United States in presidential insults. Beginning with George Washington ("old Muttonhead"), John Adams ("His Rotundity"), and Thomas Jefferson ("a brandy-soaked defamer of churches") and continuing up to the present day, readers learn about the challenges faced by each president, the insults directed at them, and how they responded. 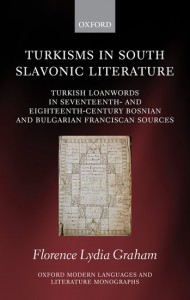 This volume explores the extent to which Turkish linguistic features became incorporated into, and influenced, South Slavonic literature, with attention to both religious and secular works of the seventeenth and eighteenth century.