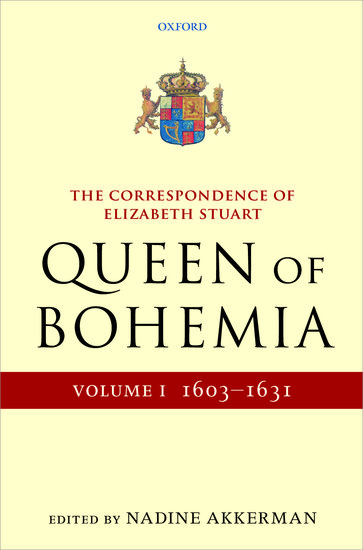 The first complete edition of Elizabeth Stuart's letters ever published. Volume I covers the years between 1603 and 1631: Elizabeth's life as princess and consort, charting her transformation from political ingenue to independent stateswoman.

Volume I covers Elizabeth's life as princess and consort in the years between 1603 and 1631. It includes letters exchanged with her brother, Henry Frederick, the courtship letters of Frederick V, Elector Palatine, and Elizabeth's experiences of both marital and court life in Heidelberg, especially her struggle with Germanic culture and her arguments with both her husband and mother-in-law over rights of precedence. From 1619 her letters become increasingly political as she begs her father, the
Duke of Buckingham, and others for assistance in the desperate struggle for the Crown of Bohemia. Deposed in 1620, Elizabeth spends her time in exile devising ploys to gain further financial, moral, and military support from statesmen and military leaders such as Sir Dudley Carleton, the 'Mad
Halberstadter' Christian of Brunswick, Count Ernest of Mansfeld, King Christian IV of Denmark, and Bethlen Gabor, Prince of Transylvania, behaviour increasingly in defiance of her father's wishes and demands.

Elizabeth's letters evidence her slow transformation from political ingenue to independent stateswoman, a position cemented as her husband fell victim to the war they had precipitated. The diplomatic writing skills she developed in this period were to become her only weapon for securing both the inheritance of her many children and her own position as a key religious, political, and cultural figure in early-modern Europe.

Adventures Into The Unknown Archives Volume 2 In this, the first book-length discussion of Cicero's Catilinarians, D. H. Berry considers how the speeches should be interpreted as literature. Can we treat them as representing what Cicero actually said?

Mahogony and Other Stories An essential introduction to the works and influence of the early 20th-century Russian writer explores their reflection of revolutionary and post-Revolutionary Russia and includes the controversial "The Nizhni Novgorod Otkos," to offer insight into the political persecution that resulted in his arrest and execution for counter-revolutionary activities.