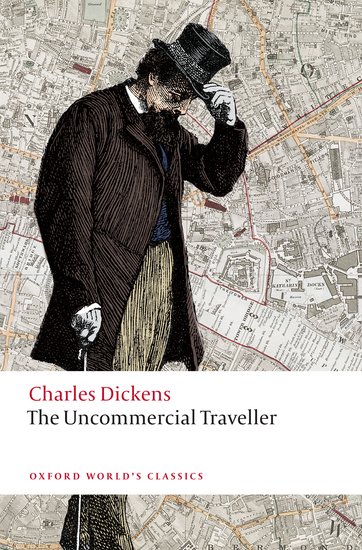 In this series of sketches Dickens brings the city of London and its inhabitants vividly to life. His travels take him to the workhouse, the theatre, and further afield to the Liverpool docks and the Paris morgue.


At the height of his career, around the time he was working on Great Expectations and Our Mutual Friend, Charles Dickens wrote a series of sketches, mostly set in London, which he collected as The Uncommercial Traveller. In the persona of 'the Uncommercial', Dickens wanders the city streets and brings London, its inhabitants, commerce and entertainment vividly to life. Sometimes autobiographical, as childhood experiences are interwoven with adult memories, the
sketches include visits to the Paris Morgue, the Liverpool docks, a workhouse, a school for poor children, and the theatre. They also describe the perils of travel, including seasickness, shipwreck, the coming of the railways, and the wretchedness of dining in English hotels and restaurants.

The work is quintessential Dickens, with each piece showcasing his imaginative writing style, his keen observational powers, and his characteristic wit. In this edition Daniel Tyler explores Dickens's fascination with the city and the book's connections with concerns evident in his fiction: social injustice, human mortality, a fascination with death and the passing of time. Often funny, sometimes indignant, always exuberant, The Uncommercial Traveller is a revelatory encounter with
Dickens, and the Victorian city he knew so well.