The Oxford Handbook of American Immigration and Ethnicity 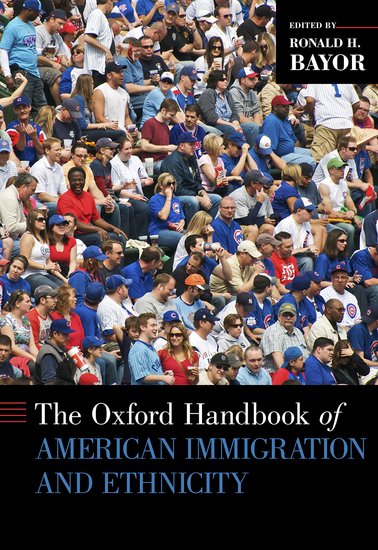 The Oxford Handbook of American Immigration and Ethnicity

The Oxford Handbook of American Immigration and Ethnicity brings together thirty leading scholars to make sense of all the themes, methodologies, and trends that characterize the debate on American immigration.

Scholarship on immigration to America is a coin with two sides: how did America change immigrants, and how did they change America? Were the immigrants uprooted from their ancestral homes, leaving all behind, or were they transplanted, bringing many aspects of their culture with them? Although historians agree with the transplantation concept, the notion of the melting pot, which suggests a complete loss of the immigrant culture, persists in the public mind. The
Oxford Handbook of American Immigration and Ethnicity explores how Americans think of themselves and how science, religion, period of migration, gender, education, politics, and occupational mobility shape both this image and American life.

Since the 1965 Immigration Act opened the gates to newer groups, historical writing on immigration and ethnicity has evolved over the years to include numerous immigrant sources and to provide trenchant analyses of American immigration and ethnicity. For the first time, this handbook brings together thirty leading scholars in the field to make sense of all the themes, methodologies, and trends that characterize the debate on American immigration. They examine a wide-range of topics, including
pan-ethnicity, whiteness, intermarriage, bilingualism, religion, museum ethnic displays, naturalization, regional mobility, census categorization, immigration legislation and its reception, ethnicity-related crime and gang formation. The Oxford Handbook of American Immigration and Ethnicity explores
the idea of assimilation in a multicultural society showing how deeply pan-ethnicity changed American identity over the time.