Collaborative Art in a Time of War 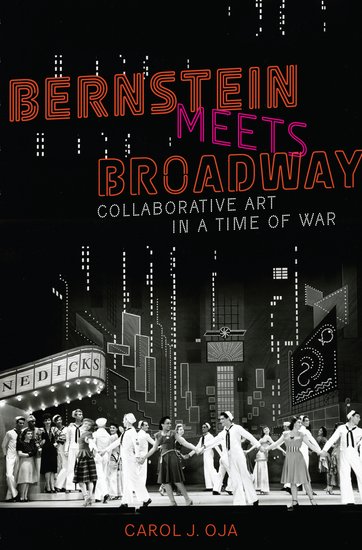 Collaborative Art in a Time of War

A super-star of 20th-century music, Leonard Bernstein is famous for his multi-faceted artistic brilliance. Best-known on Broadway for "West Side Story," a tale of immigrant struggles and urban gang warfare, Bernstein thrived within the theater's collaborative artistic environments, and he forged a life-long commitment to advancing social justice.

In Bernstein Meets Broadway: Collaborative Art in a Time of War, award-winning author Carol J. Oja explores a youthful Bernstein-a twenty-something composer who was emerging in New York City during World War II. Devising an innovative framework, Oja constructs a wide-ranging cultural history that illuminates how Bernstein and his friends violated artistic and political boundaries to produce imaginative artistic results. At the core of her story are the Broadway musical On the Town, the
ballet Fancy Free, and a nightclub act called The Revuers. A brilliant group of collaborators joins Bernstein at center-stage, including the choreographer Jerome Robbins and the writing team of Betty Comden and Adolph Green. With the zeal of youth, they infused their art with progressive political ideals. On
the Town focused on sailors enjoying a day of shore leave, and it featured a mixed-race cast, contributing an important chapter to the desegregation of American performance. It projected an equitable inter-racial vision in an era when racial segregation was being enforced contentiously in the U.S. military. The show starred the dancer Sono Osato, even as her father was interned together with so many Japanese Americans. Fancy Free amiably encoded its own dissenting narratives. Based on a
controversial painting by Paul Cadmus, it grew out of a complex web of gay relationships.

Rather than chronicling art within like-minded categories, Oja instead explores cross-fertilizations across art forms and high-low divides. She draws on intensive archival research, FBI files, interviews with surviving cast members, and previously untapped criticism in African American newspapers and entertainment-trade journals to shape a compelling story of artistic crossover and wartime exigencies.

The cataclysmic conclusion to Koontz's brilliant reworking of the classic tale.