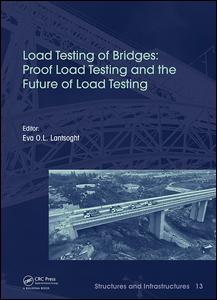 Volume 13, Load Testing of Bridges: Proof Load Testing and the Future of Load Testing, focuses first on proof load testing of bridges. It discusses the specific aspects of proof load testing during the preparation, execution, and post-processing of such a test (Part 1). The second part covers the testing of buildings. The third part discusses novel ideas regarding measurement techniques used for load testing. Methods using non-contact sensors, such as photography- and video-based measurement techniques are discussed. The fourth part discusses load testing in the framework of reliability-based decision-making and in the framework of a bridge management program. The final part of the book summarizes the knowledge presented across the two volumes, as well as the remaining open questions for research, and provides practical recommendations for engineers carrying out load tests.

This work will be of interest to researchers and academics in the field of civil/structural engineering, practicing engineers and road authorities worldwide. This volume discusses state-of-the-art technologies as well as the future trends in the development and manufacturing of 2D nanostructures and hybrid materials. Modular Systems for Energy and Fuel Recovery and Conversion "Examining modular approaches for recovery and conversion of energy and fuel, this book illustrates the importance of offering a balance of centralized and distributed energy operations made up of small- and large-scale systems. Coal, oil, natural gas, hydrogen, biomass, waste, nuclear, geothermal solar, wind, and hydroenergy are examined.The book surveys the benefits of the modular approach, where each type of energy system can be most meaningfully applied in the broad-based energy industry, and describes strategies for managing modular systems. It also outlines successful examples of modular approaches implemented across industries and by energy/fuel type"-