Studies in Medieval History and Culture

Architecture and Movement in the Medieval Mediterranean Studies in Medieval History and Culture

Architecture and Movement in the Medieval Mediterranean

This volume fluctuates between conceptualizations of movement; either movements that buildings in the medieval Mediterranean facilitated, or the movements of the users and audiences of architecture.

Beschrijving Studies in Medieval History and Culture: The Fluctuating Sea

This volume fluctuates between conceptualizations of movement; either movements that buildings in the medieval Mediterranean facilitated, or the movements of the users and audiences of architecture.

From medieval Anatolia to Southern France and the Genoese colony of Pera across Constantinople, The Fluctuating Sea investigates how the relationship between movement and the experiences of a multiplicity of users with different social backgrounds can provide a new perspective on architectural history. The book acknowledges the shared characteristics of medieval Mediterranean architecture, but it also argues that for the majority of people inhabiting the fragmented microecologies of the Mediterranean, architecture was a highly localized phenomenon. It is the connectivity of such localized experiences that The Fluctuating Sea uncovers.

is a valuable source for students and scholars of the medieval Mediterranean and architectural history. Michael Arbib presents When Brains Meet Buildings as an invitation to the science behind architecture, richly illustrated with buildings both famous and domestic. As he converses with the reader, he presents action-oriented perception, memory, and imagination as well as atmosphere, aesthetics, and emotion as keys to analyzing the experience and design of architecture. Josquin's Rome offers a new reading of the works composed by Josquin des Prez during his time as a singer and composer for the pope's private choir. Confronting longstanding problems concerning the authenticity and chronology of Josquin's music while also offering nuanced readings of understudied works by his contemporaries, the book contextualizes Josquin by locating intersections between his music and the wider soundscape of the Cappella Sistina. 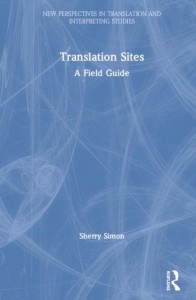 In Translation Sites, leading theorist Sherry Simon shows how the processes and effects of translation pervade contemporary life. This field guide is an invitation to explore hotels, markets, museums, checkpoints, gardens, bridges, towers and streets as sites of translation.