Epistles of the Brethren of Purity

On Companionship and Belief

An Arabic Critical Edition and English Translation of Epistles 43-45 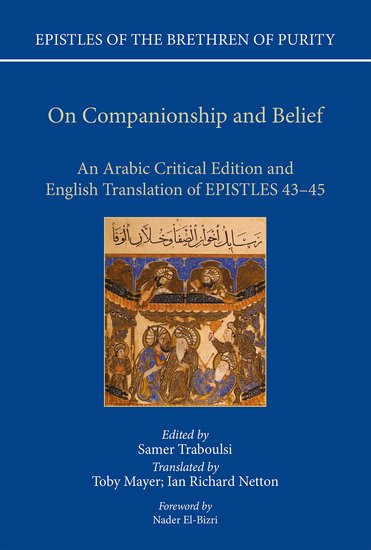 Epistles of the Brethren of Purity

On Companionship and Belief

An Arabic Critical Edition and English Translation of Epistles 43-45

This volume presents Epistles 43-45 of the Epistles of the Brethren of Purity, some of the richest and most diverse texts in the corpus. They include anecdotes and visions of paradise, Qur'anic quotations and interfaith references, and Platonic motifs, and explore the immortality of the soul and the necessity of co-operation in this world.

Beschrijving Epistles of the Brethren of Purity: On Companionship and Belief

The Ikhwan al-Safa' (Brethren of Purity), the anonymous adepts of a tenth-century esoteric fraternity based in Basra and Baghdad, hold an eminent position in the history of science and philosophy in Islam due to the wide reception and assimilation of their monumental encyclopaedia, the Rasa 'il Ikhwan al-Safa' (Epistles of the Brethren of Purity). This compendium contains fifty-two epistles offering synoptic accounts of the classical sciences and
philosophies of the age; divided into four classificatory parts, it treats themes in mathematics, logic, natural philosophy, psychology, metaphysics, and theology, in addition to didactic fables.
Epistles 43-45 succeed the extended description of religions and creeds that opens the final section of the corpus, on the theological sciences. Epistle 43 explains briefly the need for purifying one's soul by performing virtuous acts, after which one can follow the 'straight path' to God. The extremely diverse Epistle 44 is no dry exercise in abstruse theology; rather, it is characterized by the most delightful anecdotes, designed to inform the reader of a deeper truth, that of the hereafter
following the soul's separation from the body at death. Alongside references to many of the Prophets encountered in the Qur'an, this Epistle shows a familiarity with other religions such as Christianity, Judaism, and Buddhism. Epistle 45 focuses on companionship and friendship, resonating strongly
with the word 'Brethren' by which the authors distinguish themselves. The volume overall is united in its underlying themes of the immortality of the soul and the profound need for mutual cooperation, informed in parts by the general Neoplatonism of the entire corpus, as well as by Aristotelian and Platonic motifs.

The cataclysmic conclusion to Koontz's brilliant reworking of the classic tale.